PBM networks were founded to offer support to hospitals worldwide aiming to implement Patient Blood Management. The overall goal of the PBM networks is to increase patient safety. The German PBM Network was founded in 2014, soon to be followed by the European as well as Worldwide networks in 2016 and 2017, respectively. All networks were founded by members of the Department for Anaesthesiology, Intensive Care Medicine and Pain Therapy of the University Hospital Frankfurt, now also hosting the PBM Network Coordination Centre. The collaboration between hospitals part of a PBM network and the PBM Network Coordination Centre is regulated by a general agreement, adjusted to fit the local capabilities of the individual hospital.

Becoming part of a PBM network is free of any costs!

Why PBM networks were founded

The superior goal off the PBM networks is to support hospitals interested in PBM during the initial phase of implementation as well as during the later course of the project. For instance, if questions regarding specific therapeutic measures arise, the PBM Network Coordination Centre is happy to help finding answers. In order to keep the project-associated work-load to at a minimum, teaching (PowerPoint presentations) as well as publicity materials (eg, lanyards, pens, buttons, USB flash drives, cups, t-shirt, etc.) are provided free of any charge to hospitals part of a PBM network. Prior to printing, posters and flyers informing about PBM can be individualist using hospital-own logos. Printing expenses are covered by the PBM Network Coordination Centre.

A certification is offered to hospitals part of a PBM network in order to evaluate efforts during the process of implementing PBM. Semi-quantitative PBM-levels are calculated based on audits (for now: self-assessment) evaluating quantity and quality of implemented measures. Re-audits to assess a dynamic and continual progression are possible at any given time. As PBM receives more and more public awareness, a successful certification might become a powerful marketing tool in the near future. 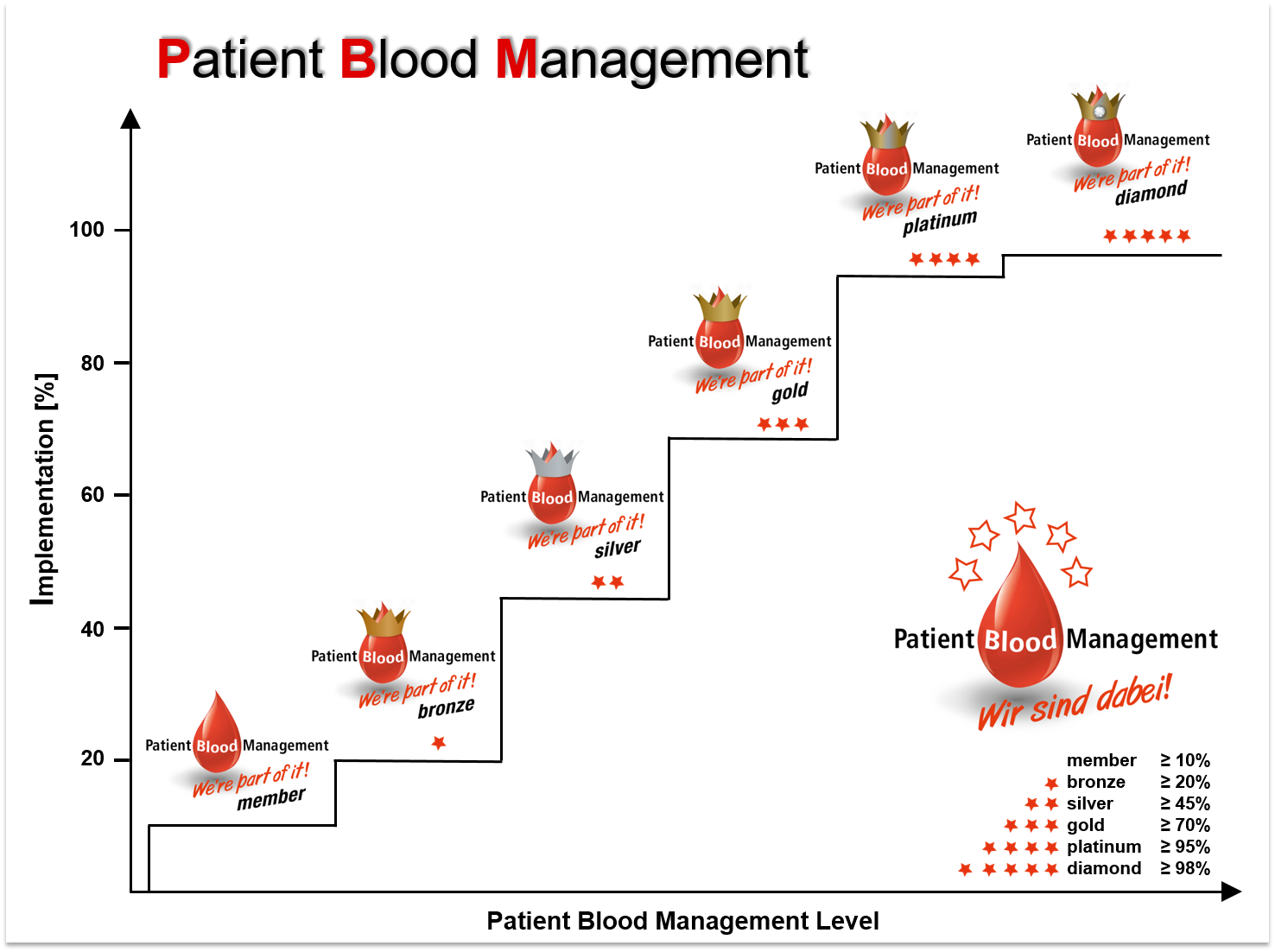 Evaluating the implementation of PBM within the individual PBM network hospitals is possible by means of routine clinical data. In addition to the consumption of allogenic blood products (red blood cells, fresh frozen plasma, platelet concentrates) and coagulation factors (fibrinogen, prothrombin complex concentrates), routine clinical data allows for monitoring complications during hospitalisation (eg, in-hospital mortality, myocardial infarction, ischemic stroke, acute renal failure, sepsis, pneumonia), length of stay in hospital as well as pre- and postoperative Hb-levels. Routine clinical data will only be assessed of in-patients (≥18 years) with at least one intervention. Data will be exported quarterly in a predefined format from clinical information systems in use at the respective PBM network hospital (e.g, Agfa ORBIS, SAP) and to the PBM Network Coordination Centre using secure encrypted connections. At the individual hospitals, exported data is pseudonymised, whereas for the PBM Network Coordination Centre data is only available in fully anonymised form, as no characteristics enabling a re-identification of individual patients are provided. Hence, inquiring an informed consent is not necessary under German law. However, for hospitals joining a PBM network from countries abroad, we advise a thorough reconciliation with local laws. Once checked for potential errors, provided data sets are imported into a secured database. Results of the descriptive data analyses will be made available to the PBM network hospitals and might, for instance, be used for internal benchmarking. In addition to the analyses for individual hospitals, provided data sets will be merged using adequate statistical methods, analysed comprehensively and published jointly with the participating hospitals. You want to join the team? Feel free to contact us: patientbloodmanagement@kgu.de

In case you want to join a PBM network or have a question – feel free to contact us! patientbloodmanagement@kgu.de